Homophobia, the discrimination against the LGBTQ community, is a rising problem in our society. From bullying in schools to discrimination in businesses to marriage laws, people who are part of this community are being oppressed, and we need to stop it.

92%. That's how many of the LGBTQ youth have heard negative messages about being in this community. And 68% of them have heard those messages from elected leaders! A lot of this might stem from the fact that some people still use the word "gay" as an insult-you would be likely to come across this standing in a busy hallway at school or scrolling through memes on your phone. And this isn't even the bullying targeted toward a specific person, who is either LGBTQ or perceived as such. The chances of somebody who is LGBTQ or thought to be being bullied is 2 to 3 times higher than somebody who is heterosexual. These instances lead to the extremes-bullying among other things is what causes too many LGBTQ youth to commit suicide. Overall, the school environment, although more welcoming in some schools, is generally not at the level of acceptance that it should be.

Homophobia doesn't end outside of school. The Masterpiece Cakeshop case was the result of a baker refusing to bake a wedding cake for a lesbian couple. Another more recent case was a bed and breakfast in Hawaii arguing that they should be able to turn away a lesbian couple, and this wasn't even based on marriage-the women were only coming to visit a friend and her baby. The opposition of same-sex marriage extends even farther-it's still banned in 13 states.

So How Can You Help?

There are lots of ways to support the LGBTQ community in their battle against homophobia. Pride month is celebrated in June of every year. If you're a student in a school with GSA (Gay Straight Alliance or Gender Sexuality Alliance), go and see how you can help in your community. The National Day of Silence is a day where many LGBTQ people and straight allies spend part or all of their day not speaking to honor LGBTQ who feel silenced about who they are. Most of all, show support to anyone you know who is in the LGBTQ community-because if enough people can do that, then eventually homophobia will go extinct forever. 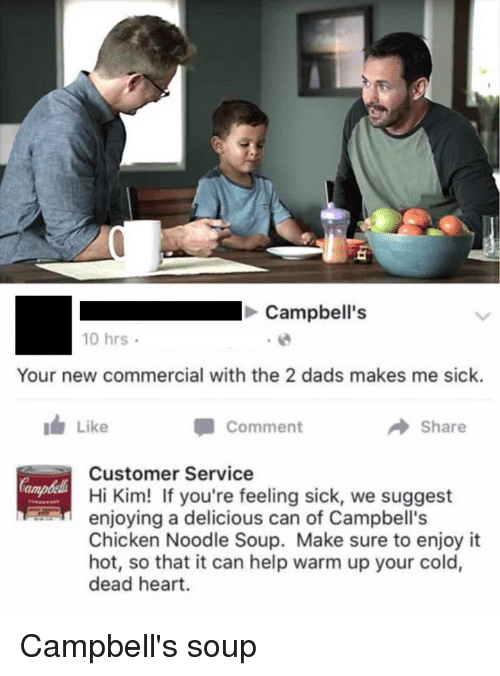 An angry viewer on social media posts a homophobic comment
on a Campbell's commercial featuring a family
with two dads. Read how Campbell's stood up
for the LGBTQ community! :)